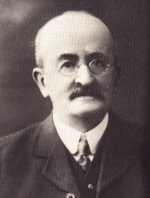 The Cork Constitution was a well read daily newspaper in the last decade of the 1800’s. It did not publish on Sundays, thus allowing the staff to be free on Saturday afternoons. Members of staff formed a cricket club, but cricket is a summer pursuit and obviously prompted by the enjoyment derived from their summer activities, thoughts turned to a winter activity and rugby football in particular. Some of the staff were very proficient in several sports, not least one David Kilroy, who was an all-rounder in the true sense. With the cricket club firmly established, the rugby club came into existence in 1892.

It was Kilroy who inspired the hearts of his colleagues. He was to see his club rise from humble beginnings that embraced rugby in rather crude form played in primitive conditions on an ad hoc basis. Kilroy believed he had the men to lift the club out of that scene into the big time. On October 5th 1895, Constitution held a meeting to discuss the inauguration of a cup competition for the many junior clubs in the city and county. A committee was appointed to run the competition in February 1896. On April 2nd 1896, Constitution contested their first cup final and won it by two tries to nil.

As the 19th century was drawing to its close, there was much debate about the fate of rugby in the Cork area. Many clubs came and went with quite astonishing rapidity. But consecutive cup victories signalled that a new power had arrived in the form of Cork Constitution FC. They were organised and here Kilroy’s guiding hand was evident. In 1897 Constitution entered the Munster Senior Cup thus attaining senior status. The first Senior Cup game was against Queen’s College at Blackrock grounds which Queen’s won 19-0. Constitution had to wait until the 1899/00 campaign for the first Cup win, beating Clonmel 5-0 at Clonmel. However, they lost the next game to Tralee at Turner’s Cross.

The club acquired a new home ground in September 1897, when a tenancy was arranged for a playing field at Turner’s Cross from the landowner Mr Butler. The club set out a pitch, which has since become synonymous with soccer in Cork. It was to be their home until 1904.

David Kilroy, Moss Landers, E.J.Fitzgerald and Edward McCarthy had been honoured by Munster before Edward McCarthy was selected to play for Ireland against Wales in Limerick in 1898, thus becoming the club’s first player to be capped.